Given the time of year, we decided to further research a local, haunted location.

The beautiful sandstone Griggs Mansion, is without a doubt considered the most haunted mansion in St. Paul. In 1883, a wealthy grocery businessman, Chauncey Griggs, built this lovely mansion. He only lived in it four years, before moving to the West coast. After Griggs moved out, the Griggs Mansion served many purposes including an art school, private residence and apartments.
Griggs Mansion has 24 rooms and 9 fireplaces.  It was a common occurrence for its occupants to leave shortly after moving in. 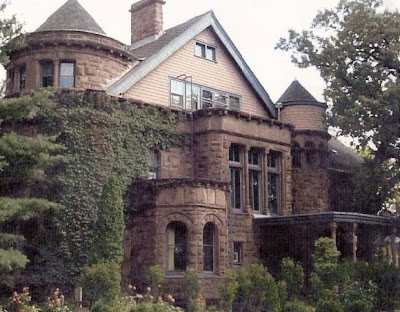 The Griggs mansion was designed by Clarence Johnston, an American Architect, who at the time was only 23 years old.  Johnston was a well known Architect in the Twin Cities and was also responsible for other well known Minnesota landmarks including; The Glensheen mansion,  and MN State Fair grandstand.
Today, Griggs mansion has reclaimed it’s original intent as a single family residence.

Most of the supernatural activity seems to be centered around the 4th floor, many other parts of the house have been known to be haunted. Footsteps have been heard in empty staircases, doors open and close by themselves, rasping coughs come from behind closed doors on empty rooms and heavy drapes swing for no reason. A college student staying in a basement apartment woke up to see a floating head of a child above him. Six or seven spirits/ghosts have made their existence known by various means throughout the years. The mansion’s spiritual occupants are a young maid ( who is believed to have hung herself in 1915 in the house), a gardener, a child, a thin man in a black suit, a teenager, and a Civil War General.